So today i made bread helped by my glamorous assistant, Mr A (i wish id made him wear a pinny so i could have posted a really embarrassing photo...). I used this tutorial on You Tube. I was really excited about making bread but also nervous - I'm one of those people who place extremely high expectations on myself and frequently fall short.


I weighed out 1lb of strong white bread flour and added a packet of dried yeast. I then added 2 teaspoons of sugar, a teaspoon of salt flakes and mixed the ingredients together. I then added 1/2  pint of warm water and mixed with a kitchen knife. I got a little worried at this point as my dough didn't look as good as that on the video...there was lots of dry ingredients left in the bottom of the bowl...so i added a tiny bit more water and worked this in.

At this point i put some flour onto the worktop and tipped out the dough to begin kneading. Kneading has always seemed to me to be some strange ritual that mothers and grandmothers do and, with my high expectations of doing it perfectly first time, i was a little worried. I was more worried when my dough was not looking like the soft, supple dough on the YouTube video after 10 minutes of kneading. 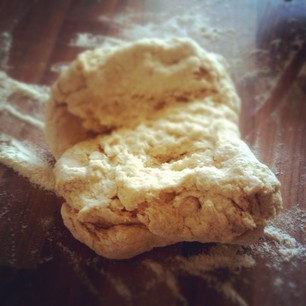 Mine seemed to be tearing a lot...i decided to leave it to rise anyway...perhaps i had been kneading it too hard?? I figured (my expectations slowly starting to crash upon the Rocks of DOOM) that it was my first attempt at breadmaking and it was good if i made some mistakes - plus never having made bread before i didn't have any idea of how the dough should feel, how hard i should be kneading etc etc. I put the dough back into the bowl, rubbed a little olive oil on the top of the dough, which was a tip from a follower on Twitter, and put some clingfilm over it.

So we left it an hour (just enough time to pop round to Mr As and make sure the cat got some food, love and attention). We got back about 75 minutes later to HUGE ball of dough. I was SO excited at this point that i was almost skipping around the (extremely small) kitchen. There's something magical about the yeast making the bread rise, don't you think?

I got the dough out of the bowl and kneaded it for a couple of minutes, the texture had gone beautifully soft. 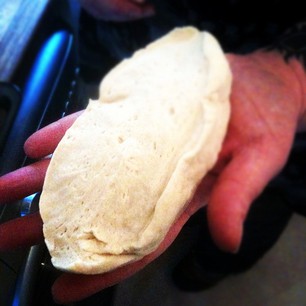 We then cut the dough into three pieces of equal size (picture above is one of the pieces - the photo really doesn't show how sensually soft the dough is at this point) and shaped into long sausage shapes and then plaited these and shaped into a round. 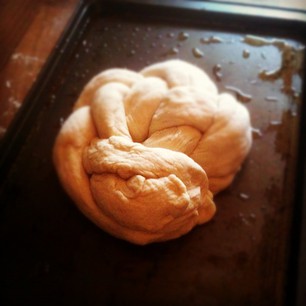 The plaited dough mixture was placed on a greased baking sheet and left on top of a radiator for 30 minutes...until it grew and looked like this!! *points below* 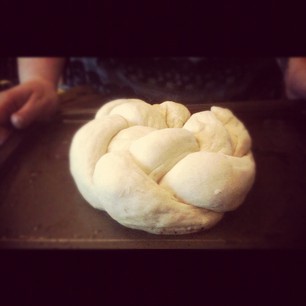 I then brushed with some milk and popped it into a preheated oven (180C) for 20 minutes (normally i think you'd put in for 25 minutes but my fan oven seems to cook things quicker).

After 20 minutes i checked that it sounded hollow on the bottom and left it on a wire rack for 10 minutes before devouring some for dinner, along with last nights leftovers... 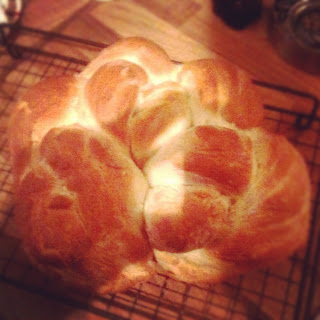 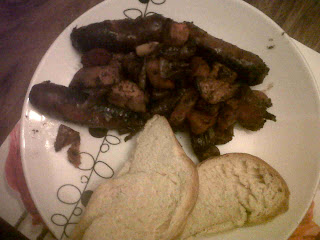 Hmm I'm really not good at making food look good on photos....i cant begin to explain the nommyness of this meal. If you remember i had made Oven Roasted Sausage and Sweet Potato last night; id made enough for two meals so the remainder had been sitting in the fridge all day. The sugars from the onions and root vegetables had intensified in flavour...it was really nice.

So i think that my initial foray into breadmaking has been a success. I will use a little less sugar next time as i found it a little sweet for my taste. I'm also going to use a loaf tin next time as a loaf is just more practical for cutting. I need to do some prep before using a loaf tin though - i know i have at least one in the cupboard but i have no idea what size it is (i know that they talk about 1lb or 2lb loaf tins but don't know how to measure this - am i being stupid??).

Tonight I'm going to prep dinner for Saturday night as I'm at university all day tomorrow. I'm going to make a hearty Polish stew and stick it in the slow cooker so it will be cooked by the time i get home.

I love my slow cooker - what do you cook in yours?

Emma_emily
Recently gave up financial security for a life of studying, crafts and cooking. And other things too, obviously. I cant do fancy cooking. I cant do fancy craftwork. I just do what i can with the main aim being to enjoy myself and learn what mistakes to avoid next time....

Fabulous sites to discover and enjoy!