Creating a Sanctuary and a Hat!

Its been too long Dear Reader, i know this and i apologise. Life has a funny habit of running away with you. Well, it does with me anyhow. In the last couple of months i seem to have been really busy doing all those things around the house that i never got to do whilst i was at work. The main thing that i needed to get done was a new roof. I cant get excited about having a new roof as its like paying A LOT of money for something which you dont really get any joy out of. That said, some months ago i was outside the house looking back at it and somehow the loft light had been left on by mistake. My roof looked a little like Heathrow's landing strip due to the light shining through the holes! So i had no choice really. It does make me feel somehow safer in the house, knowing that the roof isn't going to explode a load of rain on me at any given time though! Whilst the roof was being done i had a MAHOOOSIVE erection in the garden...(cue childish giggle....) 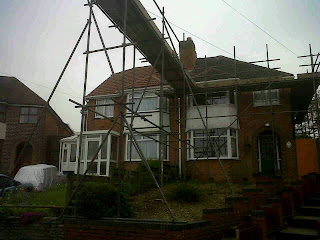 Ive also finally got around to painting my bedroom and having a carpet fitted, ive lived for 6 years with sanded floorboards, which although lovely in many houses were just draughty in my bedroom. Im about to have the curtains fitted this weekend and then the room is finished! Its really relaxing and im so in love with it at the moment that all i want to do is spend time in it. 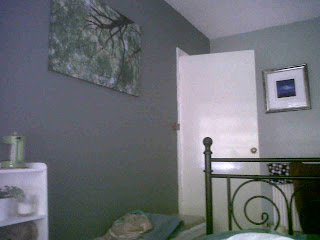 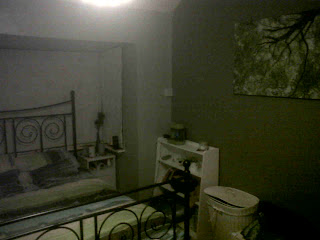 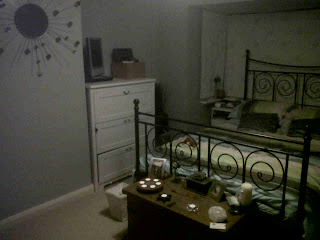 The things that i am most proud of in my bedroom are my bargain hunting, charity shop finds. I popped to a small charity shop which sells furniture looking for a couple of pieces - i got there just as they were about to take some unsold items to the tip and they said that i could take what i wanted! I took a bookcase (you can see the finished article in the photo above) and a piano stool - both were old and battered but i knew id be able to do something with them. So i sanded them down (when i say "sanded" thats really an exaggeration as i hate preparation work for these things and i wanted them to look old and worn) and then painted the woodwork white. I decided to have a go at reupholstering the piano stool in the same fabric that my curtains will be in...i mean, how difficult can it be? So armed with some pliers (to get rid of the old trimming), a staple gun and a glue gun i got to work. It was SO easy. I just stapled the new material over the old cushion, pulling tightly, tucked the corners in nicely and then finished with some ribbon glued over the edge to hide the staples - Voila! 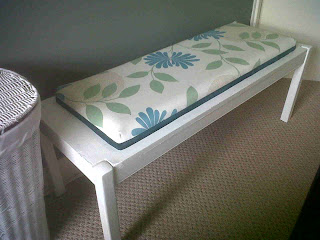 Another creative thing i did was to visit Hats From the Hall. My friend Gill rang me to ask if i wanted to go and make a hat - i think she had far more faith in my creative abilities than i did! Im not really a hat person - i dont do posh, girly, dress up and the thought of having to go to something like Ladies Day would have me running a mile, so i wasnt too sure about this. But i decided to step out of my comfort zone and go, and i was so glad i did! Louise runs the business from her amazing home near to Leicester - the house is so beautiful, i was most envious (in a nice way!) and almost wished that i could have hidden in a corner and stayed! The group of women on the course were all friends, so i was a bit of the odd one out as i only knew Gill, but they were all so lovely and welcoming, as was Louise. We got to look at the hats she was currently making as well as try on all manner of hats in the showroom. I particularly fell in love with a typical loud creation (i called it The Boy George hat!) but frankly i looked ridiculous in it. 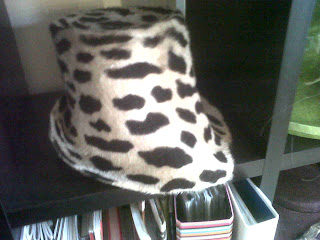 We started by deciding what kind of hat we would make - i knew that i wanted to make a felt hat as i felt that i'd actually wear that more often, but other people made fancy hats for weddings as well as fascinators. Here are some of the various types of hat we could make: 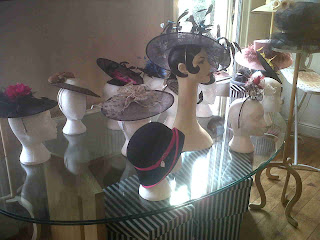 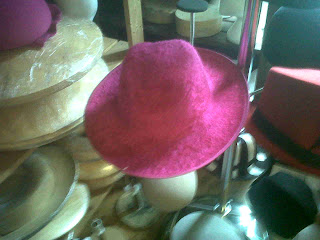 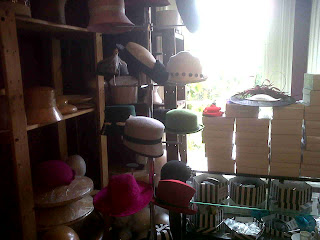 With the felt hats we had to stretch the damp felt over a hat block which helps to creats the shape of the hat: 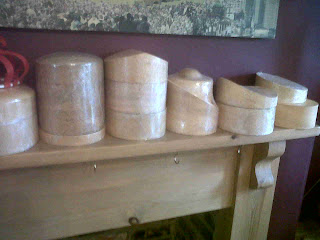 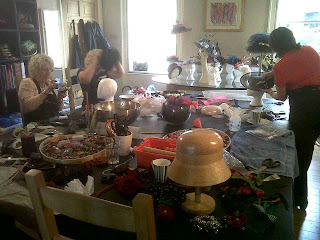 The Darth Vader looking item on the photo above is the hat bloakc that i used. i really enjoyed stretching and pinning the felt into place, it was very therapeutic except for stabbing myself with the pins all the time! 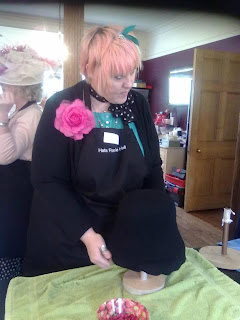 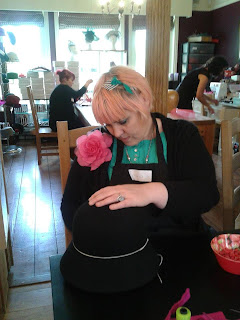 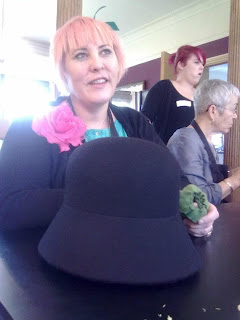 The hats were then whisked away to dry and we ate some fabulous lunch made by Louise's husband. In the afternoon our creativity was encouraged greatly as we made adornments for our hats. I found a lovely turquise bead necklace and altered it to fit around my hat and also made some felt flowers to attach to the ribbon around the hat. Here is the result of my work: 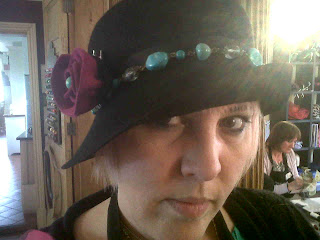 Im really pleased with it and cant stop telling people how i made it all myself! If you ever want to have a fun day making something with friends then i can highly recommend Hats From The Hall - it was great fun and Louise and her team of merry helpers have the patience of saints!

Emma_emily
Recently gave up financial security for a life of studying, crafts and cooking. And other things too, obviously. I cant do fancy cooking. I cant do fancy craftwork. I just do what i can with the main aim being to enjoy myself and learn what mistakes to avoid next time....

Fabulous sites to discover and enjoy!